Null move is used when you wants in your analyze get move to the other player without really move any piece.

viewgamesexplorer command and configuration option were addeded. If enabled, nocheto shows several first (and last if there is enough space) games from explorer database. (Note: nocheto is not shipped with filled database, you have to load games by yourself, for example from https://theweekinchess.com/.)

explore [id ...] command create list of games from explorer for current position or for given ID(s) (ID is the number in first column in games explorer.)

search command can be used to find games in explorer database by given criterias (search< for current position).
For example: search p="Euwe" vs="Capablanca" >50 1922-1938 1-0 finds all games between Euwe and Capablanca with more than 50 moves played between 1922 and 1938 won by white player.

New amazing moves command allows you to add a whole tree of moves by one command. For example, you can run moves 1.e4 (1.c4 c5) e5 2. Nf3 * to start game with those moves. You can of course add moves like that in the middle of the moves tree.

Nocheto now support graphical board on kitty console.
(This console is part of most Linux distributions, so you should be able to install it by your package manager.) 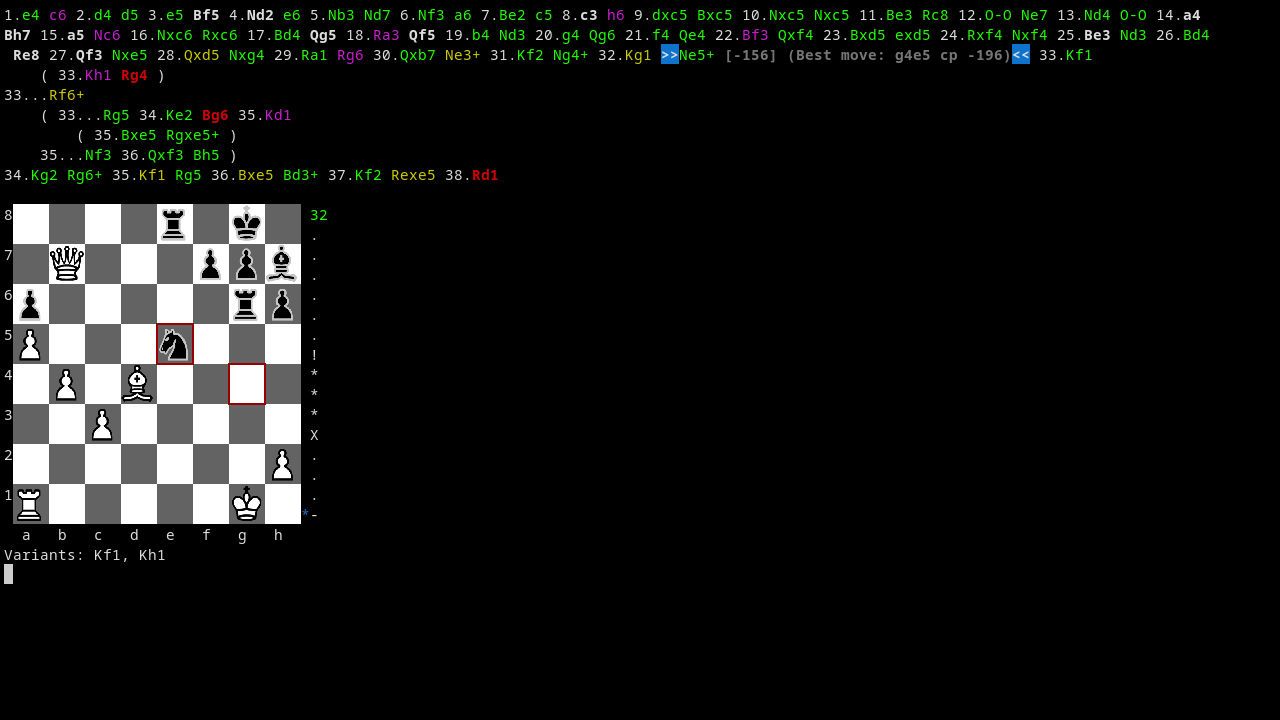 Commands analyze+, play (to end, vs <engine> or <engine> vs <engine>) and replay are running in background now (in a separate thread), and therefore can be stopped by a new stop command.

You can list all stoppable commands by new stoplist command.
(Some other commands become stoppable in the future releases!)

Example of configuration for several engenes

With this configuration, you can play against komodo by play vs komodo command, or let play stockfish against gnuchessu by play stockfish vs gnuchess command.

nochetopgn was moved to a separate package, as it is usually not required for studying or playing chess. And you can get it for free now!

Version of all packages was increased to 1.1.1.

You can play, study and analyze Chess 960 games (also known as fisher chess) now.
The following commands were added or modified to support Chess 960:

Board now shows fen with "Fen960:" for Chess 960 chess variant (if viewfen is enabled).

nochetodbeval has --chess960 option to evaluate chess960 games (otherwise they are skipped).

Namespaces were added for games stored in database. It diminishes need for using more than one database (which is still possible).
The following commands were addeded:

The games explorer can now show games from selected namespace(s).

nochetodbload has a new option --namespace which tells under which namespace games will be stored. (Default namespace is called primary).

Compressed utf8 board was added.

If you bought previous version 1.00, you can download this version for free. Just sign in and ask for linux package(s) you want.

We are proud to announce that nocheto 1.00 is on sale!

This is the first release I was working last 2 years.
And I hope you will have the same fun with it as I have!

These are the steps which must be done before Nocheto will be possible to purchase.