Once you run nocheto command, it reads its confinguration from ~/.nocheto/configs/nocheto.ini and shows you the chess board. You can also run nocheto with with a PGN file name as an argument. In that case, nocheto opens that game.

At this moment, nocheto waits for your commands. To close nocheto use quit command, or CTRL+D.

If you do so, nocheto save its state into temporary directory (~/.nocheto/temp/). Next time nochto is executed, it reads the last state - moves, analyzes etc. But in case you run nocheto with PGN file argument, it reads that file.

If you messed up things, you can kill nocheto by CTRL+C. In that case no state is saved and you can run nocheto (without PGN File argument) to get to the last saved state.

The state is saved only after quitting nocheto properly, save command, which save to PGN file, has nothig to do with it.

Default nocheto config has enabled "autoplay". It means, whenever you do a move, nocheto ask engine (default stockfish) to play move also.

You can switch on and off autoplay by autoplay command.

Algebraic and german notations are case-sensitive. So, NF3, nf3 or E2E4 are not valid moves.

So, you can write command like move e4 or move Nf3. But thats a hell a lot of writting. Therefore move command is implicit. That means, you dont need to write move and everything which is not recognised as a command is interpreted as a move.

So, the following commands do the same:
move Ngf3
move g1f3
Nf3
g1f3 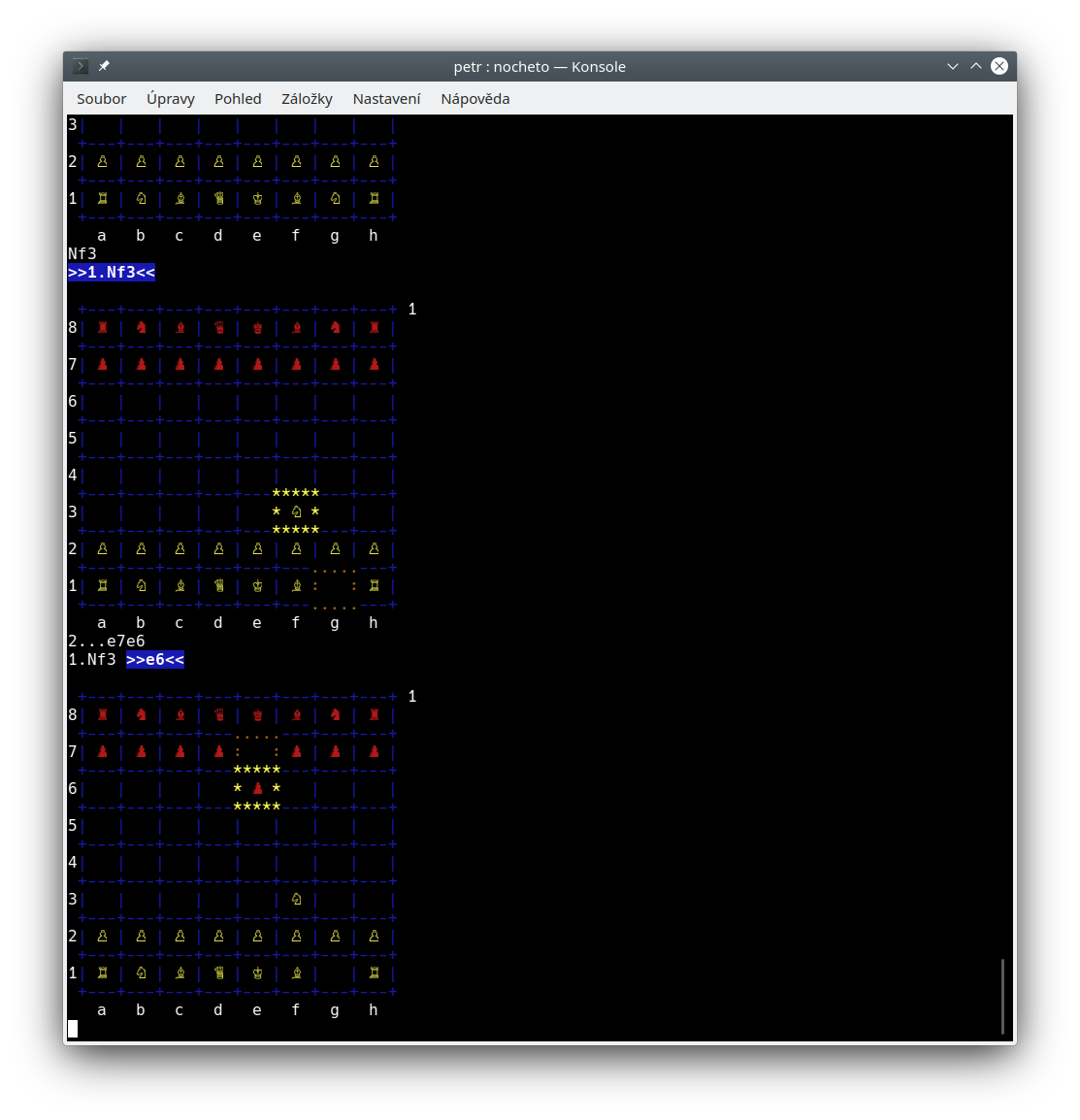 If you want to play as black, use play command to force nocheto make a first move. You can also use flipboard command to flip the board, so the black side of board will be bottom.

Once you want to start a new game, use restart command.

To play blindfold game, you simply disable automatic board drawing by autoboard command.

If you install espeak program (should by part of your linux package system), you can enable text to speach by speach command. Nocheto will then read any command engine make, so you could play with your eyes closed! 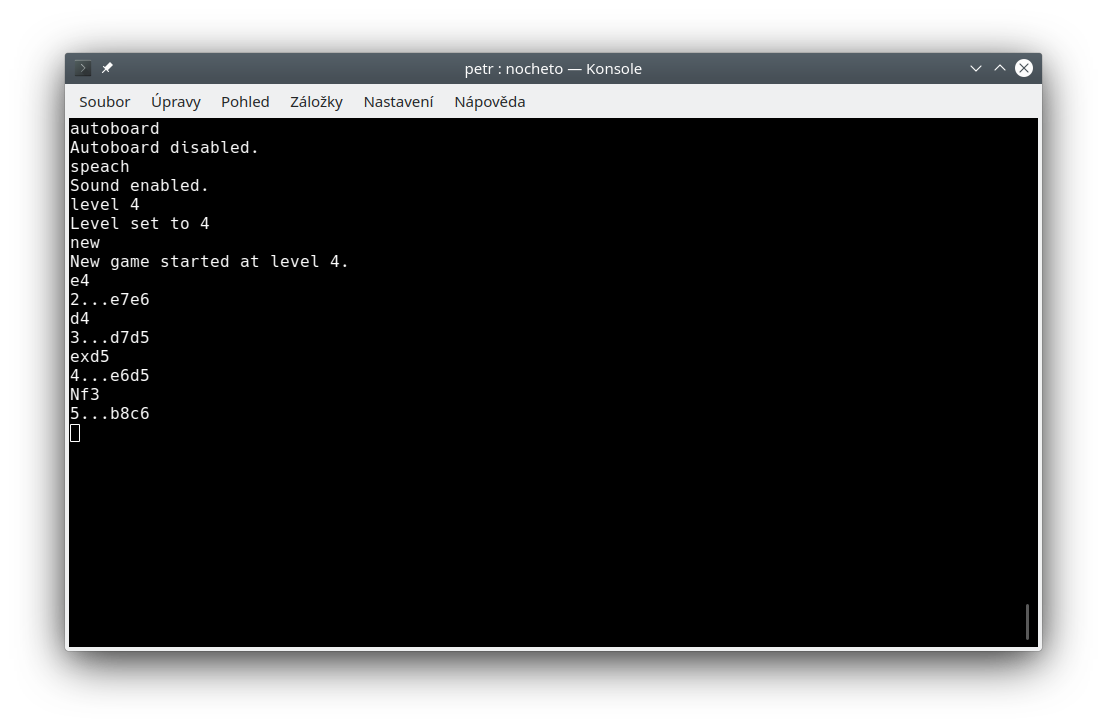 In case you want to see the actual board, you can use board command. 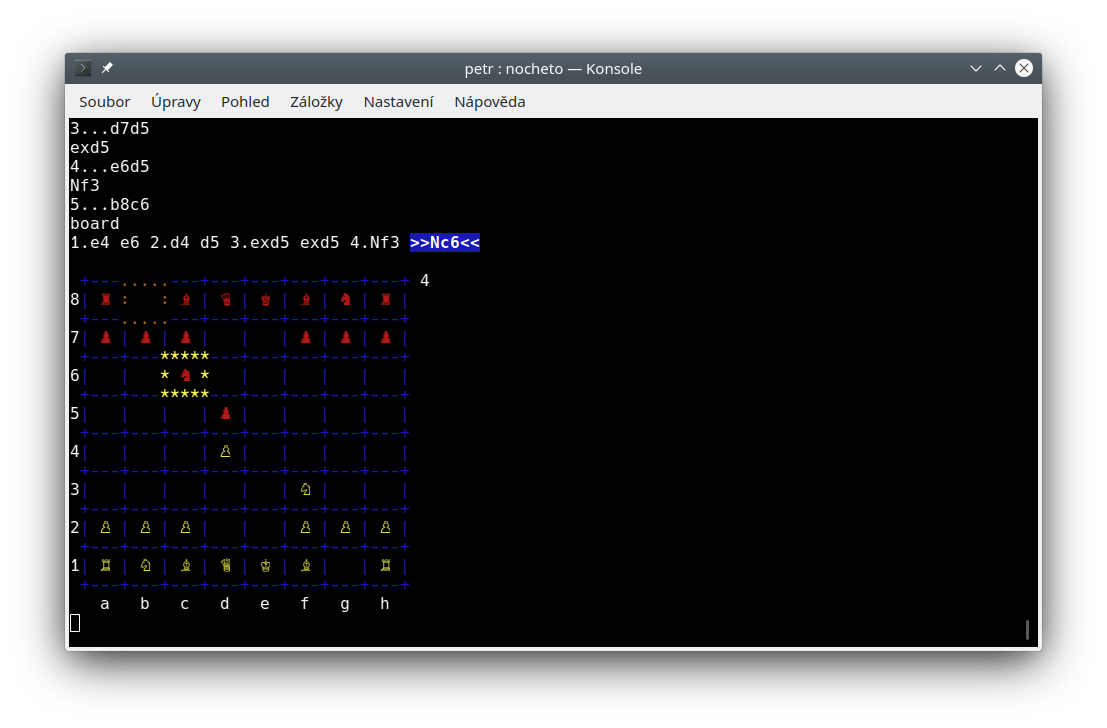 You can use CTRL+L to clean the screen again.

Most of the commands have theirs shortcuts (see help). So, instead of board you can use b, instead of flipboard just fp etc.

Using nocheto to setup board position is much quicker, than using mouse. Especially, if you can writte by all 10 fingers, you actually do not need to look at the board you where you setup the pieces, you just look at the board from where you copy the position.

To get to setup mode, use setupcommand. Use help to see all comands you can use to setup board.

First, you probably want to remove all pieces. You can do it by clean command.

First pieces are automatically white, so you can add piece by writting its annotation letter (K=King, Q=Queen, R=Rook, B=Bishop, N=Knight and P=Pawn) and the field where the piece should be. I.e. ke1 add king on e1.

To change the color, write b (for black) or w (for white) before the piece letter.
For exemple, bpa7 adds black pawn to a7. To remove piece from a field, just write the field name, i.e. a7 remove pice from a7.

You can use color w or color b to set who is on the move.

Once the positon is done, use done command to leave setup mode.

First you shoud disable autoplay mode by autoplay command, so the nocheto do not play any time you write a move.

You can open a PGN file by open command, or from the command line. Or you can anlyze game you just played.

To analzye actual move, use analyze command. It can take as an argument number of seconds the engine shoud anlyze the move.

If you add + after the analyze, the analysis will continue from current move to the end of the game (of the actual branch of the game).

analyze+ 1 will analyze all moves from the current move to the end for 1 second. Once the game is analyzed, you can see the moves tree colorized. Green move is the best, white move is almost the best, blue move is an inacurrancy, yellow move is a mistake and red move is a bludner. The actual move also shows the best line (according to the engine).

Values are in centipanws. Positive value is better for white, negative for black. So, 100 means that white is a "pawn value" better than black, -400 means black is "4 pawns" better then white. 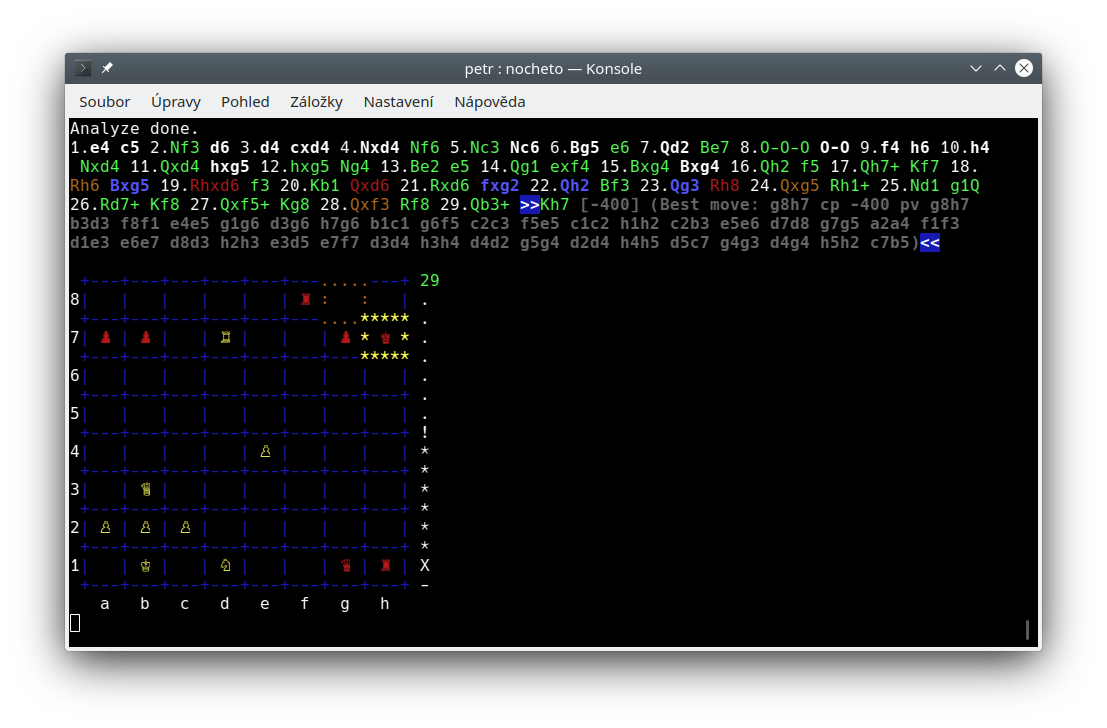 The "centipawn-meter" (also called "elometer") shows the value of actual move. The higher it is (* above the middle), the better for the side down (usually white - but if you flip the board, the elometer flips too). If you see ! in the middle of the elometer, it means the value in centipawns is eqal or above 125 (eqal or below -125 for black), which is usually winning position. Analyze command always runs engine on level 20 (the highest). The time spend on analyzing one move is the only think you should care of.

This is the most usefull and most cool part of nocheto. Imagine, you study chess game from a book and you want to analyze it by engine. Usually people use some chess GUI and rewrite moves by mouse. If you do so, you usually lost where you are in the book (or internet source).

On the other hand, with nocheto, you can rewrite the game and all analyzed variants without looking elsewhere than at the source.

If you need to writte an alternative line to a move, you just use undo command to get back and then you can write the line. Once the line is rewritten, you can use up command, which moves you back before the line, so you can start other line for the same move immediatelly, or you can use r> redo the move from main line and continue with other moves.

Nocheto can show you next possible moves from your game. Just enable variants by viewvariants (vv) command. As you can see, the board was developed in a way, which allows you get almost all information from it, so you rarelly need to look someone else (i.e. on the moves tree or graph).

If you want to go to a certain move, you can use goto <move number> command to get to the desired move, i.e. goto 5 gets you to move 5. If there are more moves number 5 (in alternative lines), call goto 5 repeatedly until it gets to the line you want to.

Once the game is rewritten, you can use save [filename.pgn] command to save the game to new PGN file, or to a file which is actually opend. To see which file is opend, use info command. Nocheto also supports tablebase. Tablebase are databases, which contain all possible moves in endgame and their evaluation (if they are winning, loosing or drawing). Nocheto downloads tablebase from tablebase.lichess.ovh (lichess public API). Tablebases are disabled by default (as everything which require internet access).

Lichess tablebase has computed all positions for 7 pieces and less. 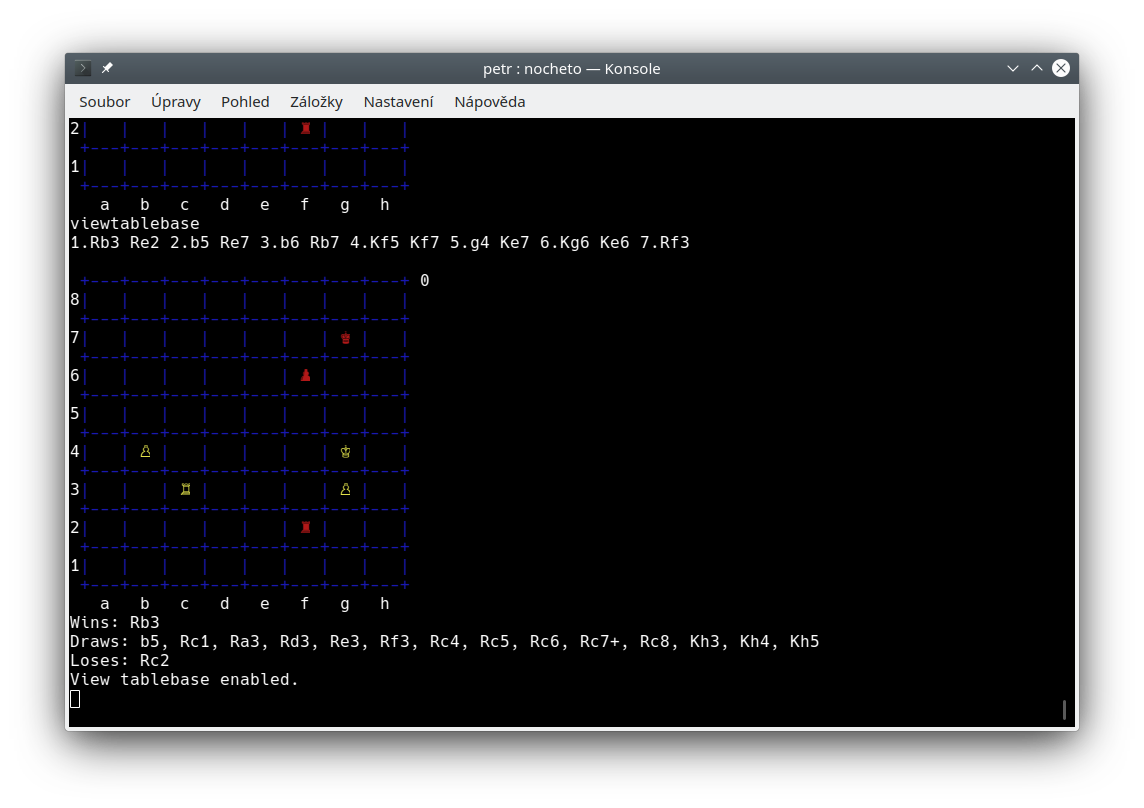 If your internet connection is slow, tablebase can slow any move you do (the board is drawn after the tablebase is downloaded). Even if moves you download are cached (so moves for any positions are downlaod only once), you might want to disable tablebases in that case.

You can find good sound on lichess github.

You need to convert the mp3 file to wav, for example:

Nocheto uses aplay program to play wav sounds, so be sure you have installed it.

This tutorial described the main function of nocheto application. But there are still many functions, which were not mentioned, like opening browser, configuration of the interface, client application etc. See the help and options for more information.